Christian Karl Gerhartsreiter, who used a variety of aliases on the East Coast before settling on the name Clark Rockefeller, is accused of killing John Sohus in San Marino in the spring of 1985. 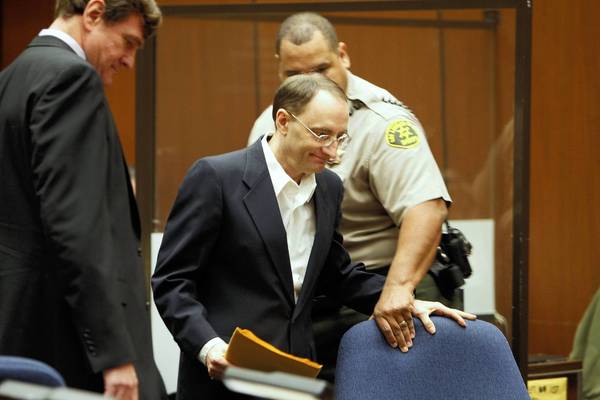 In the spring of 1985, Linda and John Sohus vanished.

The bubbly 29-year-old Linda had told friends she and her husband were going on a two-week trip east for an interview John had with the government for a secret job.

Their friends and family were immediately suspicious. They said the couple would never abandon Linda’s beloved cats at a pet hotel or leave behind John’s elderly mother, whom the young couple were living with in the upscale community of San Marino.

Adding to the mystery was the sudden disappearance of the young man who lived in the Sohuses’ guest house, an eccentric bon vivant who boasted he was a British aristocrat who taught film at USC.

After the Sohuses went missing, Christian Karl Gerhartsreiter- known in San Marino as Christopher Chichester - spent two decades living on the East Coast under a variety of aliases. He eventually settled on the name Clark Rockefeller, enjoying the cachet that came with the family name he fraudulently adopted until he was arrested in 2008 on suspicion of kidnapping his daughter during an ugly custody dispute with an ex-wife.

The story of Gerhartsreiter’s odyssey from teenage German immigrant to member of the New England social elite to accused killer has spawned books, a television movie and a host of questions about how he could have pulled off such audacious frauds for so long.

But the next several weeks of testimony in a downtown Los Angeles courtroom will aim to answer a more disturbing question: whether the flamboyant con artist was also capable of murder.

Gerhartsreiter’s team of New England attorneys pointed out that there is no direct evidence linking him to the slaying. Nobody saw the killing or the burial of Sohus’ remains and there is no fingerprint or genetic material pointing to Gerhartsreiter as the killer. Instead, the defense lawyers suggest another possible culprit: John’s wife, Linda, who was never located.

Gerhartsreiter, 52, showed little emotion as he sat in court wearing a dark blue jacket, scribbling on paper. At one point, he shook his head as his attorney recounted how prosecutors accused him of bludgeoning John Sohus.

The Sohuses had been married for a little more than a year when they disappeared. They left none of the obvious markers that people unfailingly produce in a digital age, including credit records, utility bills, driver’s licenses, Deputy Dist. Atty. Habib Balian told jurors.

John, 27, and Linda did not act as though they were leaving for good, he said. At the time, Balian said, the couple struggled financially but were in love and excited about the future.

“Life was looking up for this young couple,” Balian said.

They left behind some of their most cherished belongings, including Linda’s portfolio of fantasy artwork and a brand-new pickup truck. In addition, they had made concrete plans to attend a science fiction convention with Linda’s best friend in March 1985.

The man locals knew as Chichester, the 13th baronet, was acting strangely. One neighbor recalled black smoke with a putrid smell coming from the chimney of the guesthouse where he was living. She called to ask him to stop. He told her he was burning carpet.

In the next few months, police were alerted to the missing couple and repeatedly visited their home on Lorain Road. They noticed the mysterious man in the guesthouse.

A frequent visitor to film classes at USC, Gerhartsreiter lent the couple’s truck to a film student for a couple of months. Three postcards from the couple that appear to have been written by Linda were mailed to friends and family from France, Balian noted. But records, he said, show the couple never left the country. He accused Gerhartsreiter of using someone to mail the postcards for him in an effort to throw off the police.

“He was creating an illusion that John and Linda were away,” Balian told jurors.

It was in the same area in 1994 that John Sohus’ remains were found, buried 3 feet deep. John’s skull was found wrapped in two plastic bags, one inside the other. The first was a USC bookstore bag from the early 1980s. The other was from the University of Wisconsin, Milwaukee, that was used from 1979 to 1982, when Gerhartsreiter was a student there.

Months after the Sohuses disappeared, Gerhartsreiter showed up in Connecticut with the Sohuses’ truck, which he eventually gave to a friend. He changed his name, going by the last names of Crowe and Mountbatten, telling people he was a Hollywood producer.

He avoided the police as they tried to question him about the missing Sohuses. He changed addresses, dyed his hair and eyebrows and even disposed of his trash in public places, Balian said. Eventually, he changed his name to Rockefeller and married, hiding from his wife his real identity.

But attorney R. Bradford Bailey told jurors that the prosecution’s case was based on “scant and circumstantial” evidence that would prove little more than that his client acted bizarrely, opted not to cooperate with police and frequently changed his name, “as if our client were the first person in this city to try to reinvent himself.” Gerhartsreiter had acted similarly ever since he arrived in the country in 1978, Bailey said.

Linda Sohus, the attorney said, also acted strangely. In early 1985, she told varying stories about her and her husband’s plans and where they were going. She had her own fake name, Cody, Bailey told jurors.

In addition, DNA tests on the postcards exclude Gerhartsreiter as being the person who licked the stamps but could not exclude Linda Sohus, he said. Bailey argued there was as much evidence, if not more, that pointed to Linda Sohus - 6 feet tall, 200 pounds - as having attacked John Sohus from behind, covered her tracks and then vanished.

“After all of the evidence is heard,” Bailey said, “this old, quite cold and still untold case will still be a whodunit.”